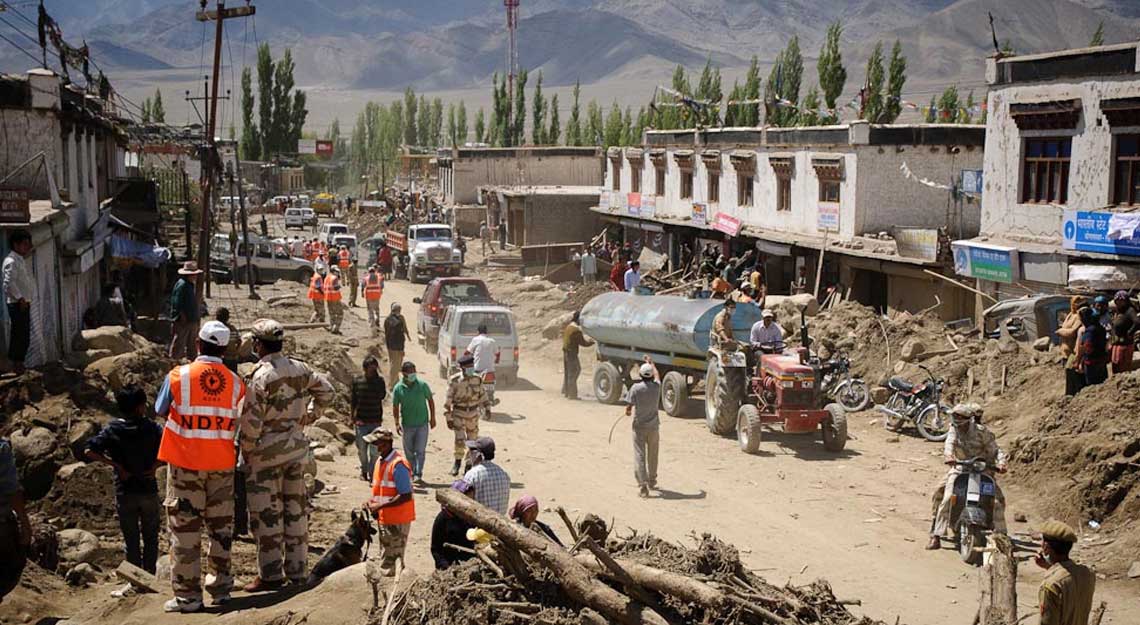 Eccentric and unheard of cloudburst in Choglamsar, Ladakh, on August 6, claimed hundreds of lives while several hundred are still missing. Buildings were razed, communication lines snapped and highways leading to Srinagar and Manali washed away. Massive destruction, caused by over 250 cm rainfall in an hour, resulted in unprecedented floods and mudslides in the centre of Ladakh. Rescue work is still on, and one should not be surprised if the toll figure goes over 500, as far flung areas in Nubra, villages on the eastern and western slops of ChangLa and densely populated villages between Upshi and Rumtek are still waiting for help to reach.

A few questions are required to be answered before nature is blamed for the tragic loss of lives and property. First, in the absence of monsoon winds, how did heavy rainfall occur? Did global warming play a role in the calamity? Can the transformation of Ladakhi Nomadic lifestyle into agrarian society be partly blamed for the torrential rains? Most importantly, why Choglamsar? Any geographer can answer the first question. Ladakh is a highland desert, strongly guarded by Peer Panjal, the Himalayas and the Stok and Zanskar ranges, which do not allow any moist air to reach the Indus valley.

Areas miles away from moist sea winds usually receive precipitation by “convectional rainfall”. Warm, moist air starts rising from local water bodies and vegetation due to solar heat. With the increase in height this warm, moist air starts cooling and forms clouds after condensation. As clouds continue to grow, the weight of the water droplets can eventually lead to precipitation, and at times, torrential rains if come in contact with cold air currents at high altitudes— normally called cloudburst. However, normally this occurs over tropical river basins in the hills (Malpa and Kinnaure in Himachal are the recent examples), where vegetations and river channels provide much needed water content and increase relative humidity. Ladakh is an exception for such climatic conditions because of unavailability of widespread water bodies, thick vegetation and cold climate.

Then what went wrong? Did climate change or global warming played a role here? Yes, it did something what was never experienced in Ladakh’s history. The average temperature has gone up by almost three degrees in the last two decades and one can see group of tourists walking in T-shirts in crowded Leh Bazaar. Mercury jumps over 30 degrees and provides prefect conditions for “Convectional rainfall”. But rivers like Indus, Zanskar, Suru, Shyok were always there — can small variation in temperature create such a catastrophe? No, there is something else which slowly and steadily invited the trouble. it’s the transformation of nomadic Ladakhi society into agrarian society. Widespread irrigated green fields and plantation along major river valleys across Ladakh provided much needed moister to rising warm air responsible for cumulonimbus clouds. Ladakh was a nomadic society, mainly dependent on livestock products and locally available natural resources. Leh, Khlasar, Kargil and Padum were small hamlets of kuccha houses and few shops; Thiksey, Shey, Phutkul, Lamayuru, Hemis and Alchi monastries preserved Buddhist art and culture within their structures built with mud walls and thatched roofs, wall paintings (Thousand Buddhas) of Alchi monasteries were intact for hundreds of years before it first experienced rains in the nineties. Ladakh used to receive below 20 cm of precipitation annually which made this highland desert fall in the category of Gobi, Atakama and Tibet plateau, with snow-fed rivers sneaking through rugged mountains and deep gorges; exposing very little to sun resulting in negligible evaporation and almost no rainfall. Things changed rapidly over the sparsely populated desert after 1962 Chinese invasion and deployment of Army over Siachen in mid-eighties. Border Road Organization (BRO) built roads till the fag-ends of the borders.

The world’s three highest passes—Khardung La, Tanglang La, Chang La —all at over 17,000 feet height got allweather, motorable roads. Civil administration opened new schools and hospitals in far-flung areas, laid communication lines and provided employment to locals. Money was poured into agricultural and irrigation schemes. Rapid overall development resulted in population boom, multi-fold increase in arable land and expansion of permanent human settlements. Rugged brown mountains along the rivers got converted into green zones. The Indus valley from Upshi to Khalsar is no way inferior to the Kashmir valley in terms of marvellous landscape, greenery, fertility and prosperity. The Sham region turned into apricot basket of India with thriving villages like Thimisgam or Hemisukpachan and Likir. The Nubra valley, known for double-humped camel and sand dunes at 3500 meters above sea, started extensively growing Leh-berry (Chhester Lulu), barley, vegetable and other unconventional crops across Shyok and Siachin rivers. Villages by Saltoro range such as Bukthang, Turtuk and Tyakshi turned the entire landscape into green. Once dominated by thorny bushes, Dishkit, Hunder and Panamik turned into tourist hubs. Zanskar and Markha valleys also followed the trend.

Thousands of hectares of new irrigated green fields and acres of new tree plantations, spread the water from narrow rivers over a large surface exposed to evaporation, ultimately resulting in unprecedented torrential rains. Rapid growth of human population and green fields for food tempered the eco-system of a high-land arid region, leading to the catastrophe of August 6. Why Choglamsar, everyone seems to ask today. Ladakh is the biggest district of the country with an area of over 95,000 sq km, but why calamity struck Choglamsar, a tiny settlement 6 km away from Leh town, known for scrap market of discarded army goods on the Manali highway. Ironically, it’s in the bull’s eye of tempered-eco system. The Indus becomes wider near Choglamsar and Shey areas. If we look at the geography of the region, Choglamsar is in the centre of the green belt. Villages (Latho, Gaya, Miru) across slopes from Tanglang La to Upshi turned into major farming areas, nearby Hemis and Stok villages expanding its green belt every year. The Indus valley down Choglamsar completely turned green till Khalsar.

High Stok range in south and Ladakh range in the north converts the area into bottom of a bowl. Widespread green fields with moisten, open water surface of the Indus and rising day temperature provides favourable and deadly conditions for cloud formation, which created havoc on the area settled on loose soil mountains. Increasing rainfall first raised eyebrows of some local environmental groups in 1992-93 and they warned about the consequences of changing a high-land desert into a green belt. But nobody paid heed to this. Ladakh was never ready for rains, mud houses and monasteries with thatched roofs are still standing on mountains of loose soil without deep foundations. Infrastructure developed for arid zone were shattered with the first stroke of nature’s retaliation. The Indus Valley may experience increase in rainfall in the coming years. Should we go for sustainable growth honouring local eco-system or just choose rapid growth for economy? We have to think seriously standing on the rabbles of Choglamsar.

Article appeared in The Economic Times